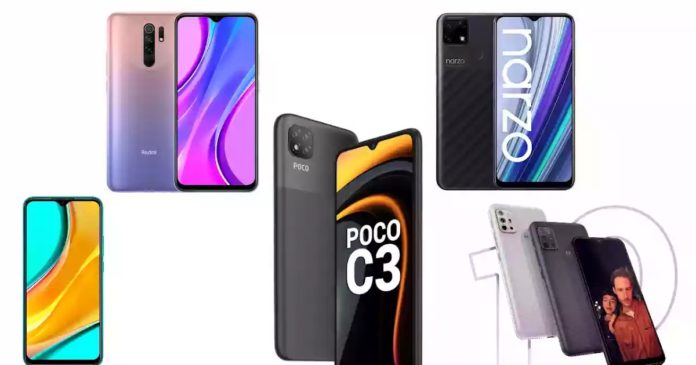 These days, having a phone is more of a fashion statement than a need. Since everyone now owns a smartphone, the need for them has evolved, and they are now a necessary tool for staying connected to the rest of the world and being present. So, I get you the list of a few Mobile Phone under 10000.

Prior to now, smartphones were only available to parents, for business purposes, or possibly in phone booths. However, today, everyone—students, workers, housewives, or anyone else—can own a smartphone. The problem is that nowadays consumers aren’t seeking for phones, but rather a smartphone with outstanding camera quality, good appearance, and other important qualities for a reasonable price. Considering that companies launched smartphones with significant advancements after realizing their task.

In order to learn the most recent information on phones and mobile phones under 10,000, read this article.

The Realme Narzo 50A has great camera quality and is the best mobile phone under 10000.

This phone has been positioned as a little better than the last series of Narzo 30A in terms of hardware. Realme Narzo 50A weighs around 207g and its display is quite big.

You can have great features with HD+ display of this amazing mobile phone under 10000.  It has a 50-megapixel primary rear camera and macro camera which is solely there to fill up the spec. sheet.

The battery life of this phone is really good and can run for 2 days on a single charge with some camera usage, gaming and video streaming.

It has a sporting 6.52 display with a dewdrop notch.

Uniquely, Infinix offers a dual flash configuration with two LED flashes at the front. For its price range, the Smart 5A’s plastic body is sincerely acceptable. It has 2GB of RAM and has 32GB of expandable storage. The infinix smart 5A is powered by the MediaTek Helio A20 SoC. The Smart 5A’s operating system is Android 11 with XOS 7.6 on top of it (Go Edition).

Simple dual cameras with an 8-megapixel primary camera and an additional AI (depth) camera make up the camera arrangement. If cameras are important to you, this shouldn’t be your first choice because the camera performance is average in both bright and dark conditions.

The most stylish and decent mobile phone under 10,000 is the Oppo A15.

The most stylish and decent mobile phone under 10,000 is the Oppo A15. All the Oppo phones are really amazing. They all have multiple features and, and the A15s is no exception. It features a 6.5-inch HD+ water drop eye protection screen, a 2.3GHz Mediatek Helio P35 octa-core engine, and Color OS 7.2 based on Android 10.

It has 4GB RAM and a huge 64GB ROM that you can expand up to 256GB and runs smoothly. If you’re in the market for your first smartphone, the Oppo A15s is unquestionably one to take into consideration. It has a 4230mAh battery, a triple rear camera setup of 13MP + 2MP + 2MP and an 8MP front camera.

The Micromax In 2b may not be a master of all trades. Micromax In 2b excels in a few areas, elevating it above rival smartphones. And is a good option to consider. It is a basic phone with a plastic body. Micromax In 2b is decent mobile phone under 10000, its display is sufficiently bright and displays decent colors. It has Unisoc T610 SoC processor which is only available in a few mobile phones.

Unexpectedly, the processor proved to be rather capable, performing admirably not only for everyday tasks but also for some light gaming—something unheard of in the entry-level smartphone market. Micromax In 2b is a smart option for a mobile phone under 10000 category.

The software experience was quite slick thanks to Android 11 and the absence of bloatware and third-party apps. The performance of the camera and the video were both merely ordinary. With some gaming, the 5,000mAh battery easily gave me one and a half days’ worth of use, which is excellent. The included 10W charger’s charging speed was a little too slow, and it took more than 3 hours to finish the charge.

Samsung Galaxy M12 is the best mobile phone under 10000

Samsung Galaxy M12 is a sleek mobile phone under 10,000. The most dependable brand in the smartphone business, Samsung, presents the Galaxy M12, which features a quad camera arrangement with 48MP + 5MP + 2MP + 2 MP and an 8MP front camera. Samsung leads in every area, whether it is low, mid, or premium.

Realme C25 has a thick, yet manageable, plastic unibody that is durable. There is some give and take, as there is with every low-cost smartphone. Due to the absence of an ultra-wide-angle camera like its predecessor, the Realme C25, what the MediaTek Helio G70 processor gives it in terms of processing power, it also loses.

The battery life is excellent for a mobile phone under 10000. If you are only looking for a phone for calling purpose and using basic apps then this is adequate one. The camera’s performance is good. Overall, individuals on a tight budget who want battery performance above all else may find the Realme C25 appealing.

A reasonable smartphone with a big 6.5-inch screen is the Moto E40.

Despite having a plastic body, the Moto E40 did not seem flimsy. The smartphone from Motorola features curved sides as well, making it simple to hold in one hand. The 198g weight of the phone is noticeable when holding it. It has a 6.5-inch LCD panel which boasts at a 90Hz refresh rate and HD+ resolution.

An octa-core Unisoc T700 SoC powers the phone. This processor comes with 4GB of RAM, 64GB of storage. It has a 5000mAh battery in addition to other features. There are no variations for this phone, although a microSD card can increase capacity by up to 1TB.

A 48-megapixel primary camera, a 2-megapixel depth sensor, and a 2-megapixel macro camera are all included in the Moto E40‘s triple camera configuration. The front camera of this phone is  8-megapixel.  The performance of the camera in good light was subpar in low light. A great option as a mobile phone under 10000.

Rinkal - December 16, 2021
0
Happy Sunday from Software Expand! In this week's edition of Feedback Loop, we talk about the future of Windows Phone, whether it makes sense...

We Found the Sexiest Lingerie on the Internet

StreetScore scores a street view based on how safe it looks...

A first glimpse at Java 9: Early access release of JDK9...

Xbox One to launch in China this month after all

Xbox One to launch in China this month after all

ABOUT US
Newspaper is your news, entertainment, music fashion website. We provide you with the latest breaking news and videos straight from the entertainment industry.
Contact us: contact@yoursite.com
FOLLOW US
© Newspaper WordPress Theme by TagDiv
MORE STORIES
Mobile Phones